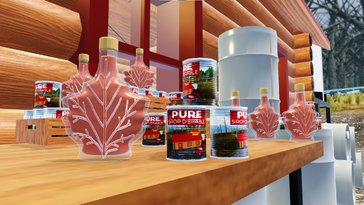 Maple Syrup plays a key role in Mon Bazou, as it has several different uses in the game.

It is one of the three basic Player Needs that you need to look after to survive; it can be thought of as the game's thirst meter. Kali-Gas stocks 21 bottles of it per day, and they can be purchased for $7.00 each. The player can also make and seal their own Cans of syrup in the Sugar Shack, but doing so requires buying the necessary equipment.

It can also be used as a source of income. If the player can make enough syrup to fill a Barrel, it can be sold to the Maple Syrup Federation for a tidy sum of cash: $200 instantly, and $200 per week for the next 5 weeks, payable on Sundays. One full barrel of syrup will pay the player $1,200 in total. Many players chain this effect for multiple barrels over multiple weeks, resulting in weekly paychecks in the tens of thousands of dollars. A more in-depth explanation on how this works can be found on the Barrel page.