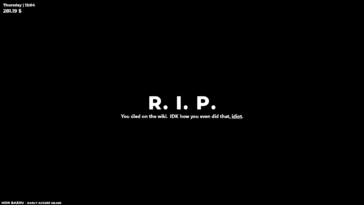 As of the current build of the game, the consequences of death are quite mild. Dying will teleport the player back to their Mobile Home with a temporary slowdown effect; any tool you were carrying will be brought with you, but any Cannabis joints in your inventory will be lost. If you were driving a vehicle, it will be left near where you died, but there's a good chance it will have continued rolling after you've died.

Currently, there are four ways the player can die:

The player does not take damage from falling, crashing their car, having High Anxiety, standing in fire, falling through the map, or other similar actions.